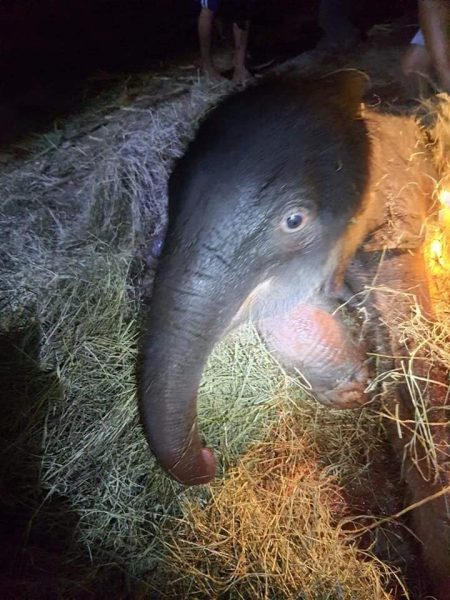 We cannot be more thrilled to welcome our 80th successful birth! Soiselee gave birth at 10.30pm 15th May to a beautiful girl. As Soi is considered our daughter and we witnessed her birth it was exciting when she called out to us at 9.45pm with a giant crazy roar. We went outside, (she sleeps outside our place), and saw she was in labour so sat near her while she pushed out her baby. Every baby is a miracle and will help keep the elephant gene pool diverse and healthy but Gaowsiri แก้วศิริ will be special.

The root word ‘gaew’ (แก้ว) has several meanings, although the meaning of most common usage is ‘glass’ — the glass that one drinks from. Common usages aside, both ‘gaew’ and ‘siri’ have ancient origins. Some may even argue that ‘gaew’ has mythical origins, birthed in a time unacknowledged by modern thought, a time immemorial when there was only a fine, transparent veil between the physical world and the spirit world. ‘Gaew’ was inspired into being by the gods who wanted an object of such transcendent beauty, purity, clarity and transparency to outlast hundreds of human generations. ‘Gaew’ is destined to remain unbroken and undamaged in a world that is so full of conflict and suffering.

The literary meaning of ‘gaew’ is ‘crystal’. Then again, the meaning itself goes far beyond the crystal as an earthly substance.

The ‘gaew’ crystalline substance cannot be conceived on the earthly plane. It is not an earthly crystal, but a divine crystal that does not conform to earthly crystal properties. The ‘gaew’ crystalline substance illuminates the world around it more than any other jewel on earth. This ‘gaew’ could glow so brightly and expansively that it could light up the night, and make nighttime look like day. The divine ‘gaew’ crystal generates abundance and attracts the greatest treasures to the one who is in possession of the ‘gaew’.

The word ‘siri’ (สิริ), when added to any root word, enlarges the meaning of that word. ‘Siri’ has its roots in Pali. ‘Siri’ is the goddess of fortune. ‘Siri’ could also mean splendour, beauty and majesty. Or a more common meaning would be ‘that which is good and pure’, and that would be the ‘siri’ used in everyday language.

When ‘siri’ is attached to ‘gaew’, ‘gaew’ is transformed from an object into an entire dimension of existence — a realm of the ‘gaew’ substance governed by the gods of creation.